To capture the attention of the smartphone generation is not easy for marketers. These figures have changed the way Canadian marketers and retailers engage their audience.

To strike a chord with millennials, marketers, retailers, and even the police have adopted QR Codes in Canada.

QR Codes are 2D Barcodes that can link to information such as, websites, images, and videos.

QR Codes are easy to use. A smartphone equipped with a QR Code scanner is all you need to view the encode information.

Here are 5 ways how businesses use QR Codes in Canada:

Use cases of QR Codes in the Canadian marketing segment are diverse. From product packaging, customer surveys, to raising awareness for causes, QR Codes are an active part of marketing.

Statistics show that the usage of QR Codes is soaring. To ride this wave, the Ontario Tender Fruit Producers Marketing Board introduced QR Codes on fruit packaging. Scanning this QR Code allowed buyers to view more information about the fruit.

“We want to make it as easy as possible for consumers to access information about tender fruit, whether that’s at the grocery store or on their smart phone device while they’re on the go.With the many different recipes as well as information on where fruit is available, it’s never been this easy to buy and enjoy local” – Sarah Marshall, Manager, Ontario Tender Fruit Producers Marketing Board

In 2011, Western Canadian brewery, Kokanee, added QR Codes to the packaging of their limited edition beer, Mountain Can Series. 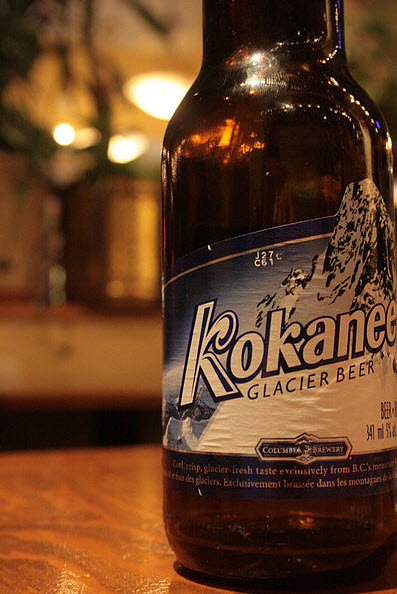 The QR Code linked to interactive maps of some of Canada’s well traveled mountains.

The Canadian PFLAG (Parents, Families and Friends of Lesbians and Gays) group partnered with radio station Shazam to launch an awareness campaign. As part of the campaign, the mouths of the people on posters are covered with a QR Code. Scanning the QR Code redirects the scanner to a video of the person on the poster sharing their story.

In 2010, Big Wild, a wildlife, and environment conservation society, posted QR Code posters across seven cities in Canada. The campaign aimed at saving the Flathead River Valley and Restigouche watershed. On scanning the QR Code, people could sign an online petition to protect the flora & fauna of these locations. 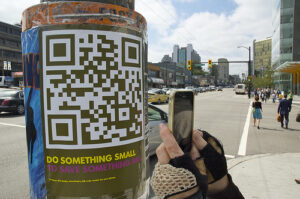 “We’re always looking for new strategies and approaches to get people’s attention. We wanted to try out a campaign with these QR codes and add an element of mystery. The idea was that we would entice and intrigue people. The people who might scan the codes are technologically minded, so they would know about the code and know what to do with it.” – Darren Barefoot, Program Manager, Big Wild

In 2014, St-Hubert, a Canadian casual dining chain handed out flyers with QR Code to their customers. On scanning the QR Code, customers were led to a feedback form. Sharing feedback gave customers a chance to win a CAD 250 gift card. 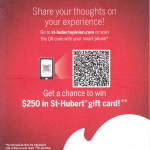 Also Read: QR Code Marketing for beginners: How to get started

In Oct 2013, Royal Ontario Museum, Canada launched a mobile app called ScopifyROM. Using this application, visitors could scan QR Codes placed next to the exhibits. Scanning the QR Code offered visitors an in-depth description plus interaction with the artifact.

The app allows the visitor to assume the role of a museum curator thus, enhancing their experience.

“What we wanted to do here is emphasize discovery. What visitors are doing is looking at objects in a new way. We are adding a new dimension to let them scopify or see something else about the object and then they almost draw their own conclusions. We help them by providing the tools but then they do it and they make the discovery and that is what is revolutionary—not the technology it’s the application of it.” – Dan Rahimi, Vice President of Gallery Development, Royal Ontario Museum.

In a press conference held in 2011, the Quebec police released a QR Code in a bid to find the killer of a young woman. The QR Code linked to the image of a key witness in the case.

The police believed that QR Codes technology would appeal to a majority of teenagers and they could get a breakthrough in the case. 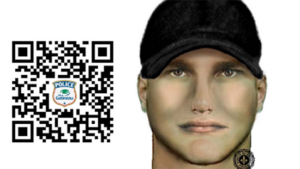 The police also added that sharing an image via a QR Code would be more effective than flashing it on TV. Sometimes, people might need a second look for positive identification.

“It’s out there. We’re going to consider doing other cases.” – Sgt. Jean-Paul Le May, Gatineau police

In 2017, Climate’s Sake, a registered charity based in Toronto, Canada added QR Codes to trees at the Humber Arboretum park. Each specie of tree comes with a unique QR Code. Scanning the QR Code will link visitors to a page listing details of that particular species. The initiative is part of the Treecaching trail that encourages technology loving youngsters to spend time with nature. 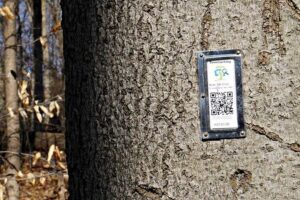 Opened in 2016 in Mississippi Mills, Ontario, The Metcalfe Geoheritage Park has on permanent display, a variety of local stones. Some of these stones date back to 500-450 million years. The park also has a QR Code on display that helps visitors learn more about these rocks. The QR Codes in the park were designed by The Association of Professional Geoscientists of Ontario (APGO).

“This (QR Codes) will enable visitors with mobile devices to connect digitally with a wealth of geo-information about the site and the specimens.” -APGO chair, Dr. Bill Pearson

Starting 2012, QR Codes on headstones became a common site in Canada. The first funeral house in Canada to adopt this service was Remco Memorials Ltd. The QR Code encodes personal details about the deceased. Anybody visiting the grave can scan the QR Code to view the memories of the now deceased in form of images, stories, and videos.

“I think it will take a number of years before it becomes mainstream but it is certainly starting to gain momentum.” – Adam Reeson, Marketing Specialist, Remco Memorials Ltd 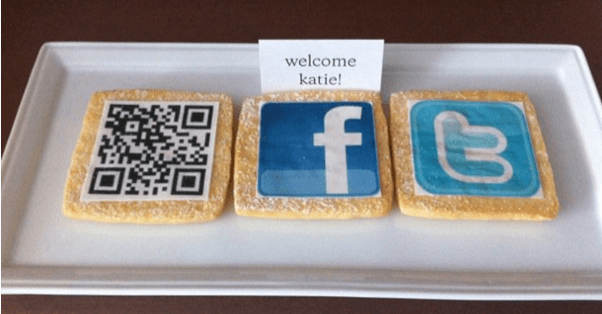 Also read: QR Codes in Hotels: Use Cases for Marketing and Customer Engagement

Based in Ontario, construction firm Allan Avis Architects adds QR Codes to their design blue prints. The QR Code allows scanners to understand the design in detail. It also helps other workers stay up-to-date on any changes in the design. 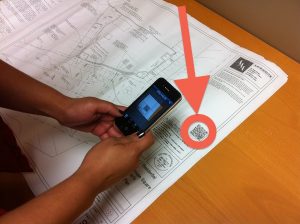 Also read: QR Codes in Construction: A List of 3 Diverse Use Cases

Valet Car Wash in Cambridge, Canada had adopted cashless payment method via QR Codes. Customers can scan the QR Code placed at the entrance of the car wash to make a payment. 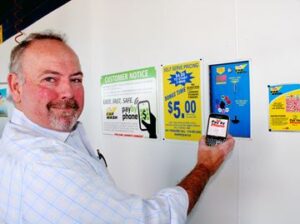 “We were looking for a payment system to attract the millennial demographic who typically don’t carry cash or credit cards anymore. They carry a cellphone and a debit card.” – Mike Black, Owner, Valet Car Wash

Also Read: QR Code Payments: Everything you need to know

The QR Code technology is versatile. The above case studies show how QR Codes have carved a niche for themselves in Canada.

One reply on “QR Codes in Canada: Eight Interesting Use Cases”

Great ideas in this article… is there any data to share about the success of these efforts?