After the Western and Central Railways, Brihanmumbai Electricity Supply and Transport (BEST) of Mumbai, has adopted the QR Code ticketing system.

This move comes after BEST experienced a drop of 2 lakh commuters between Oct-Nov 2015.

BEST caters to more than 30 lakh passengers daily. This makes it the second largest public transport medium in Mumbai.

“Any drop in the number of average daily commuters is alarming for the transport undertaking, which is already reeling under heavy losses it is estimated to cross the Rs 1,000-crore mark in 2016-17”

“We (BEST) are exploring ways to woo more commuters”

This is how the mobile ticketing system functions: 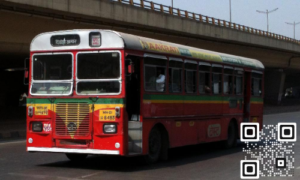 The system is set to launch in November 2016. Many cities are adopting QR Code ticketing to help citizens.

What are your thoughts on BEST’s new ticketing system? Share your views with us in the comments section below.