On April 6, 2017, Paytm announced it’s latest feature that allows users to scan any QR Code. The feature is available on the latest Android app update (Version 5.7.1).

How to use Paytm QR Code Scanner

Here is how you can use the Paytm QR Code scanner: 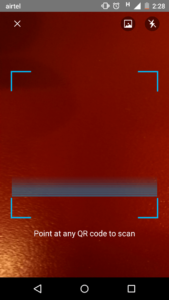 However, on testing, it seemed that the app was unable to scan URL QR Codes. It gave an error saying “This QR Code cannot be used for payment.”. This seems like a bug, which Paytm should fix in its next app update.

Note that the QR Code scanning feature is currently exclusive to Android users.

It is not just Paytm and Snapchat that can boast of an inbuilt QR Code scanning feature.

Before Samsung, Google Chrome had introduced an inbuilt QR Code scanner which caters to iOS users.

What do you think of the Paytm QR Code scanner? Share your thoughts in the comments section below.