I would be stating the obvious if I say that tourism should be an important agenda for a city. Getting tourists to spend their money in your city is just good economics. All you need to do is to ‘wow’ the tourists so that they go tell their friends to experience your city too.

But this is easier said than done. Attractions of a destination (landscapes, monuments, beaches, etc.) are only valid as long as a great tourist experience compliments them.

Tourists often complain that ‘the place was great but getting there was troublesome’. Or ‘The museum was beautiful but everything was in the local language. That was a bummer’.

Cities that realize this challenge are investing in strategies such as supporting tour agents, information kiosks, travel booklets. And even audio guides, signboards, information boards. Or anything and everything that will help keep tourists happy.

However, these are capital intensive measures and what does a city do if it’s on a low budget?

Contents hide
It’s time to go mobile!
Ok. So we use their smartphone. But to do what?
Give access to the unlimited tourist information
Let there be no language barrier
Push information depending on where they are
Ensure luggage security
Help download the official apps
Help travel within the city
Paint the Town with QR Codes
How to create a QR Code
I. Create QR Codes one by one
II. Create QR Codes in bulk
III. Create QR Codes programmatically
Create your own QR Code Campaign

In this era of smartphones, adopting mobile engagement strategies is the way to go. According to Statista, the number of smartphone users in the world is expected to reach a staggering 4.3 Billion by the end of 2023. Also, according to Datareportal, more than 60% of the world’s population used the internet in April 2021. So, instead of investing in capital-intensive and ancient techniques, cities should leverage the smartphone of tourists as a medium to increase the flow of information. We can call this ‘infrastructure crowd-sourcing’. It is using the infrastructure of your audience (the smartphone in this case) to solve your problem (flow of information).

Ok. So we use their smartphone. But to do what?

You can provide them with the information they are looking for such as directions, notes on historical significance, stories, reviews, emergency numbers, embassy contact information, and do’s and don’ts. City administrations from various countries are already doing this.

You can even track QR Code’s scanning activity such as how many people scan it, where did they scan it, and when did they scan it. This provides valuable insights into your visitors. And this information can also help you identify the best tourist attractions to enhance them further.

In 2015, the Government of Kerala (India) adopted QR Codes. These QR Codes were put on many signboards across the state. Each QR Code linked to the Kerala tourism webpage and helped people learn about tourist spots around the state.

Let there be no language barrier

Smartphones are of great use in translating the information to the language of their choice. This is important as it removes any language barrier. Thus, making it easier for tourists to explore and get around the city.

Push information depending on where they are

Instead of waiting for tourists to search information using Google or on your website, why not push information on their smartphones? This can be easily done using QR Codes.

Getting luggage misplaced causes quite a great deal of inconvenience to the tourists. It can even harm the goodwill of the city’s tourism. Hence, you must ensure luggage security for the visitors.

And this is where luggage tags with QR Codes come in handy. When scanned, the tag displays the owner’s details such as name, mobile number, or email ID.So when somebody finds the lost luggage, they can scan the QR Code to see the owner’s details and contact him to return the same.

It can be hard for tourists to find official apps for the city’s admin. These apps could be for tourism, emergency services, or travel services. So rather than having them tediously look for the correct app on the App Store or Google Play Store, give them an easier alternative—App Store QR Code.

An App Store QR Code, when scanned, takes the end-users to the encoded app on the required App STore as per their phone’s OS. No need for them to manually search for anything. This would again translate to a better visitor experience.

Help travel within the city

QR Codes can help travelers commute easily. How? Here are a couple of ways:

Paint the Town with QR Codes

A QR Code is a 2-D barcode that redirects the user to the intended webpage. QR Codes can also store offline information such as contact details and Google map locations. It is a low-cost mobile engagement tool that makes destinations tourist-friendly. One can put up QR Codes at places of interest such as monuments, art galleries, museums, town squares, and city halls.

On scanning a QR Code, the tourist (or for that matter locals) can read relevant text on a website, see photos and videos. Or listen to audio guides, share interesting information on social platforms, and get directions on Google maps.

See how the following cities are using QR Codes to engage tourists: 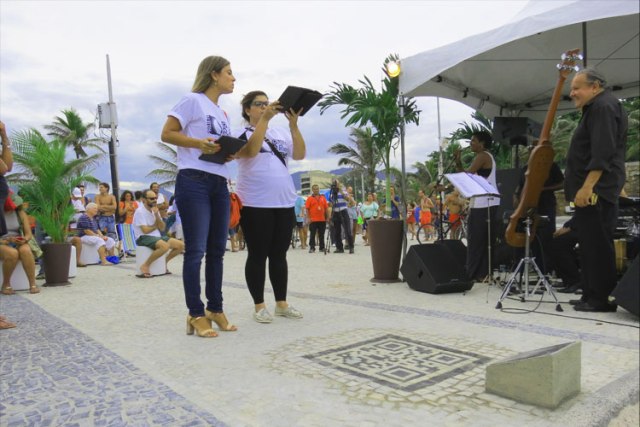 In 2013, Rio de Janeiro added QR Codes into its trademark black-and-white mosaic pavements. According to a report by Associated Press, Brazil planned to deploy around 30 QR Codes at beaches, vistas, and historic sites across Rio to allow tourists and locals to learn more about the city. 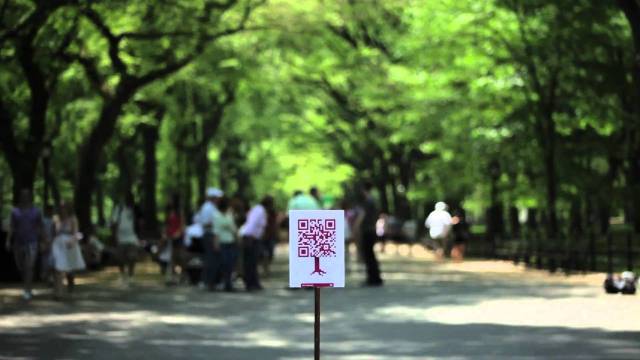 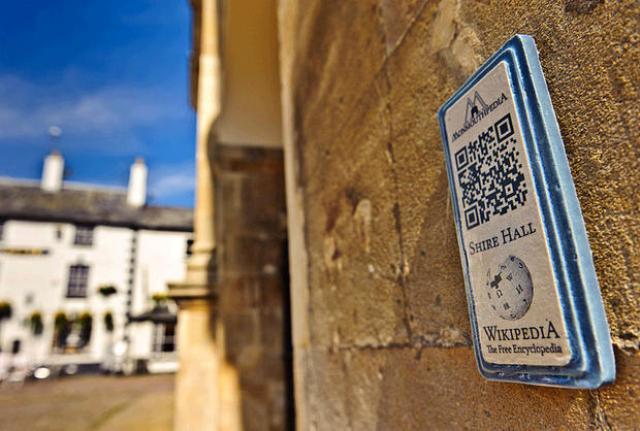 Monmouth, a small Welsh town, brags itself to be the first ‘Wikipedia town‘ after announcing plans to install 1,000 QR Code plaques linking back to Wikipedia articles. 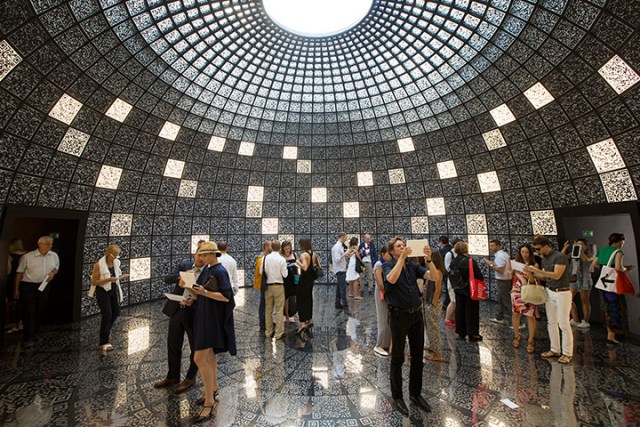 The Russian Pavilion at the Venice Biennale 2012 allowed enthusiasts to learn about the Strolkovo Innovation Center, a new development that aims to concentrate intellectual capital around five clusters (IT, Biomed, Energy, Space, Nuclear Tech), through QR Codes that covered every inch of the Pavilion.

In 2017, QR Codes were added to Memorial Park in Ohio by Randy Ark, a Vietnam War veteran. Visitors could scan it to view information about the country’s dauntless heroes and veterans. They could also scan the QR Code near any monument inside the park to get its history.

In addition, the National Museum of Scotland uses QR Codes on about 80 objects in the museum. When scanned, they direct the visitors to see videos, images, and read fun facts about the artifacts.

One of the most unique and extraordinary uses of QR Codes can be seen in Yunnan Wildlife Zoo in China. Here, a living panda is situated inside the 20 feet QR Code. 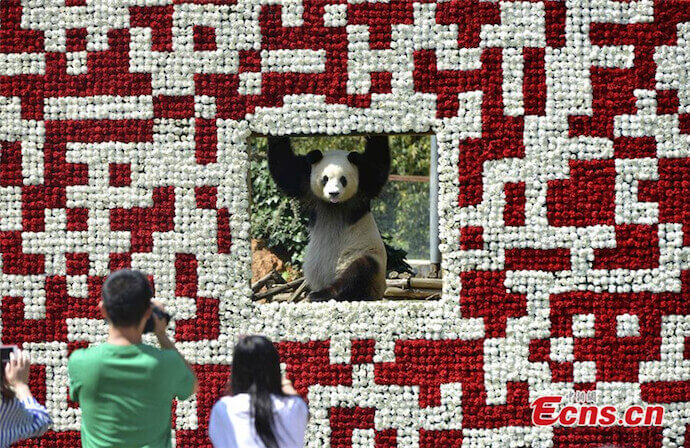 Many other destinations across the world such as China, Abu Dhabi, and the Philippines also have QR Codes across the city to guide tourists and locals.

How to create a QR Code

Now you know why it makes sense to use QR Codes for cities. It offers a better experience to the tourists and makes various operations better for you. The next question that comes into the picture is—how to create one?

Depending on what you want your end-users to see, you’d have to choose the suitable QR Code category. For example, if you want your customers to redirect them to the city’s government sites, you’d use a Website URL QR Code. Or if you want to tell complete information about the monuments, you’d need to use a Document QR Code.

Once you’ve decided, you can start creating QR Codes. Here are three ways using which you can generate QR Codes:

I. Create QR Codes one by one

This option is best when you don’t need to create multiple QR Codes together. Furthermore, it offers a wide variety in terms of the type of QR Codes that you can create.

To create it, you simply need a QR Code generator that offers the QR Code you want to create.  A simple Google search will fetch you many options to choose from. To make it easier for you, here is a detailed comparison of the best QR Code generators available online. You can go through it to find the best one for yourself.

If you need to create a large batch of QR Codes together?  You can use a bulk QR Code generator service. It not only saves time but effort too.

For more information, you can go through this detailed guide on how to generate QR Codes in bulk.

That’s it. That is all you need to know on how cities can become tourist-friendly even on a low budget. Now, it’s time for your city to go hi-tech.

Create your own QR Code Campaign 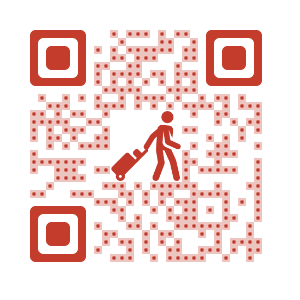