You have probably seen black & white square-shaped barcodes on magazine ads or business cards. These are QR Codes. They do the job of connecting you from print media to useful online content. But have you ever wondered how QR Codes work? How is a QR Code scanner able to read it?

After reading this guide, you will become an expert on how QR Codes work.

Contents hide
How QR Codes work
QR Codes are made up of data modules
Number of rows and columns of modules are determined by the Version Number
Data can be encoded in four-character modes
Size of the module is determined by Timing Pattern
Scanner identifies the QR Codes via Finder Patterns
Separator distinguishes finder patterns and data
A QR Code needs a Quiet Zone to be identified
Alignment markers determine the orientation of the QR Code
Format Information is also required to decode the QR Code
Error Correction allows wear & tear
Mask Patterns make QR Codes more readable for the scanners
Storage capacity of a QR Code
Scannability
How to scan a QR Code
How to make the most of the QR Codes
1. Direct traffic to your website
2. Gain social media followers
3. Share contact information
4. Provide event information
5. Share documents
6. Boost app downloads
7. Offer discounts and coupons
Best Practices
1. Add an appropriate CTA
2. Add a design to the QR Code
3. Test scan the QR Code
4. Choose optimal printing format
Create your first QR Code now

Think of a QR Code as a language. Humans can’t read this language but mobile devices and scanners can.

Just as the English language has rules on how to form a sentence, a QR Code is also made up of elements.

Here’s a sneak peek on how it works:

In addition, the illustration below can also help you out. It depicts the basic structure of a QR Code and its elements:

QR Codes are made up of data modules

A Module is the fundamental unit of a QR Code. They are the black-and-white blocks that make up the data encoded in a QR Code.

Modules store data and make up the rows and columns of the QR Code (called the Data Matrix). Positioning of data bits begins from the bottom right corner of the matrix. It moves upward in a two-module wide column and switches direction on reaching the top. 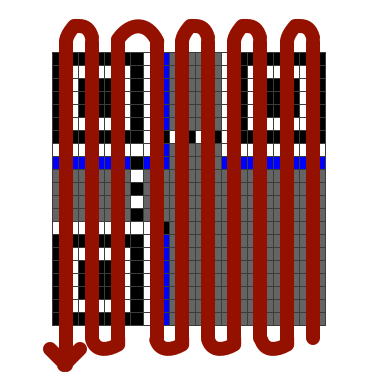 A QR Code has equal number of rows and columns of modules (square-shaped). But QR Codes cannot have any number of rows (or columns). The number depends on the Version Number of the QR Code. For example:

Higher the version number, higher the number of rows and columns. Thus, higher is the storage capacity.

Data can be encoded in four-character modes

It is possible to encode data in a QR Code in four modes – numeric, alphanumeric, binary, and Kanji. Storage capacity differs depending upon version number and encoding mode.

Size of the module is determined by Timing Pattern

The sixth row and column make up the Timing Pattern. These are alternating black-and-white modules. These enable the scanning software to understand the width of a single module.

Unlike barcodes, QR Codes have Finder Patterns (also called Position Markers or Eyes). These take up three corners of the code. Their function is to help scanners recognize the QR Code accurately and allow them to read the QR Code at high speed.

They are mainly responsible for identifying a QR Code and its orientation.

A separator helps the scanner distinguish between Finder Patterns and the actual data.

A QR Code needs a Quiet Zone to be identified

A QR Code must have white space (equal to 4 modules thick) called a Quiet Zone around the boundary of the QR Code.

It helps the scanner to locate the Finder Patterns.

Alignment markers determine the orientation of the QR Code

The Alignment Markers are smaller than position markers. They help the scanner determine the orientation of the QR Code. This makes it possible to scan a QR Code at any angle.

Format Information is also required to decode the QR Code

A QR Code has the capability to remain scannable even if it is somewhat damaged – up to 30%. This is possible due to an algorithm called Reed-Solomon Error Correction. CDs and DVDs also use this algorithm to remain readable despite scratches, wear & tear, etc.

There are four possible levels of error correction: 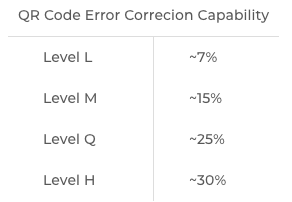 You may have noticed that some QR Codes have images in them as part of their design. This is possible because designers add the image as an error. 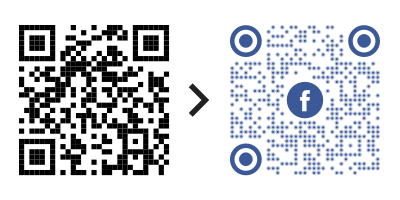 Masking is inverting the colors of the modules. Dark modules convert to white and white ones to dark.

Data Masking is a way of choosing the best possible arrangement of modules. This makes it easy for scanners to decode the QR Code.

There are eight Mask Pattern possibilities. For example:

Here is how to choose the right masking pattern:

Storage capacity of a QR Code

QR Code can store up to 7089 digits or 4296 characters, including special characters. This is more than the capacity of barcodes and makes it possible for QR Codes to store massive information.

QR Code’s scannability largely depends on its elements’ color and the background’s color. It is mandatory to ensure sufficient contrast between the two.

How to scan a QR Code

Now you know how a QR Code works. So, the next question is—how to scan one?

To scan it, you need to follow these basic steps:

1. Open your smartphone’s camera (in case it has a QR code scanning feature inbuilt) or a third-party QR Code scanning app

2. Hold the camera in front of the QR Code

That’s it. You’ll receive the notification once it gets scanned. It’s just like clicking a picture.

How to make the most of the QR Codes

Here is how you can leverage QR Codes:

Say you want to take people to your website. It could be for any use case such as:

To do it, you probably will add a link to the appropriate webpage on your promotional creatives. But here’s the problem—end-users will have to pull out their smartphones, open the browser, tediously type the link, and finally visit your website. This is a long process. While some people may do it, others won’t bother doing it.

But a Website URL QR Code can help you accomplish this feat easily. Simply add it to your promotional materials and end-users can scan it to visit your website. After all, the easier the process, the better are the conversions (website visits here).

The importance of social media presence has become essential for both an individual and a business. But you can’t hope people will search your social media handle and follow you online.

What you can rather do is use a Social Media QR Code. When scanned, it shows all your social media platforms such as Facebook, LinkedIn, and Twitter. End-users can then select their favorite platform to follow you online.

Networking is an integral part of the professional world. And when you meet people, you probably give them your name card in the hope that they’ll connect with you. But that’s not enough.

Recipients have to pull out their smartphones to open their contacts app and type all your details to finally save you as a contact. This needs them to put effort. Hence, no wonder why most business cards end up in the trash rather than in the recipient’s phone.

But just putting up a QR Code on the card can increase the likelihood of them actually saving your contact.

It’s called a VCard QR Code. Recipients scan it to see your contact details on their phones with a button—Save as Contact. Hence, it removes the need for them to manually type your details. A simple scan is all they need to do.

Say you are organizing an event and need to inform your audience about it. An Event QR Code can help you do it.

Your audience can scan it to see your event’s complete information including exact venue location, timing description, and images. And in addition to it, they also get the option to RSVP.

Sharing documents among friends, colleagues, or customers is common. It can be reports, PowerPoint presentations, or product details. And a Document QR Code can help you do it. Your audience just needs to scan it to access the encoded document.

Do you have a mobile app for your use case? You know getting people to download your mobile app can be quite a task. But an App Store QR Code can help you here. When scanned, the QR Code redirects the end-users to your app on the app store based on their mobile’s OS. They can then download the app and start using it.

You know how valuable coupons and discounts are. They help attract customers and ultimately lead them to make a purchase. But customers don’t like remembering random characters.

This is where a Coupon QR Code can help you. When scanned, customers can redeem the coupon to avail its benefit.

Here are some of the best practices that you must know regarding QR Codes:

CTA translates to ‘Call-to-action’. It is a small instruction that tells the users what action they need to do. And this kind of small text nudges them to take the required action.

2. Add a design to the QR Code

If you are planning to use QR Codes for promotions, consider adding design to them. That’s because they are visually appealing and can grab the recipient’s attention.

As a matter of fact, custom QR Codes attract 50%-200% more scans than plain black-and-white ones.

It is always advisable to test scan the QR Code before putting them out for your target audience.

It’s recommended to use QR Codes in vector formats such as SVG, EPS, and PDF if you’re going to use them for print media creatives. They ensure that the QR Code doesn’t get pixelated even after you zoom in or zoom out.

That’s all you need to know. You are now an expert on how QR Codes work. Get started by creating your first QR Code. 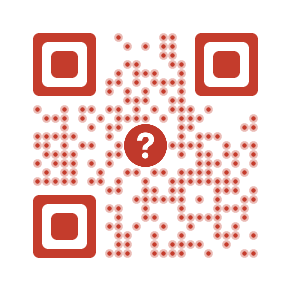 Still have a question about how QR Codes work? Ask in the comments below.

4 replies on “How QR Codes work: Everything you need to know”

Hi Gautam! This blog was very informative. You were really spot-on regarding most of the technical details. Plus, the fact that you have explained everything in a very simple manner is also commendable. Good job mate!

Do the black and white act as 1’s and 0’s in binary code?

We are glad you found the article helpful.

Hey Souvik, we are glad that you liked the post.